My four days in the Corinthia passed much too quickly for my liking.

Day 1: Arrive at the Isthmus and introduce students to the delicious fastfood Goody’s chain; view the canal from the old national highway bridge; race to the top of Acrocorinth before the site closed (now 3 PM, no longer 7); visit Kenchreai and muse for 10 minutes about Paul’s haircut; check in hotel(s); dinner at the Gemelos Taverna where I ran into Dr. Scott Nash and group.

Anyone who has been to Greece has a photo like this. 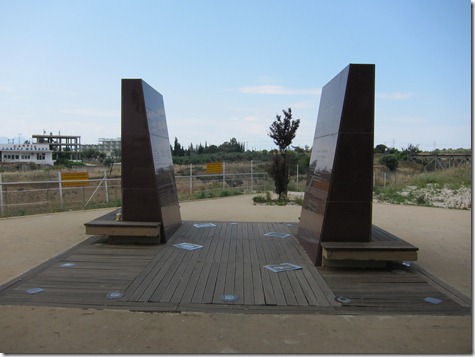 But probably not like this.  The monument erected in 2009  commemorates the Hungarians István Türr (1825-1908) and Béla Gerster (1850 1923) “who planned, organised and directed the construction of the Corinth Canal, a masterpiece of 19th century engineering.”

What I wouldn’t do to get this picture on a clear day.

Ancient Corinth (to right) and part of the western coastal plain on May 30, 2011.

Day 2: Visit Mycenae with class, where Dr. Abaz Kreymadhi gave us a physics lesson on the behavior of sound waves (at least that’s what he told us when we were talking to the wall) and I remembered how much I had forgotten about the world of Agamenon); visit Nafplio for an excuse to have the best gelato in the world (I had not forgotten how good that gelato was); visit archaeological museum while students beached and climbed the Palamidi; dinner at the Gemelos Taverna where I ran into Dallas Deforest and Chris Cloke and Mark Hammond 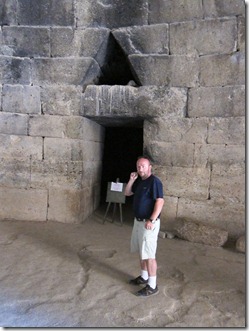 Day 3: Students day to explore Corinth gave me time to tour the diolkos and canal with Sophia Loverdou.  More on this over the next few days.

Day 4: Students’ day to explore the Corinthia and Argolid.  Return to the diolkos for photo shoot; visit Isthmia where I ran into Tim Gregory, Tom Tartaron, Amy Dill.