I just finished reading the T. Tartaron, D. Pullen, R. Dunn, L. Tzortsoulou-Gregory, A. Dill, and J. Boyce, “The Saronic Harbors Research Project (SHARP): Investigations at Mycenaean Kalamianos, 2007-2009,” Hesperia 80 (2011), 559-634. I rarely get excited about the Bronze Age, but it’s hard not to get excited about a major new site. Extending for over 7 ha and including over 50 buildings, the site of Kalamianos represented a major harbor on the Saronic coast. Constructed primarily of the grey Corinthian limestone, the outlines of the site remained visible on the surface allowing the SHARP team to outline the site and its buildings without excavating. Using the techniques of intensive pedestrian survey they produced a significant ceramic assemblage of material from the site which they feel grounds the site chronologically in the Late Bronze Age. A larger regional survey of the region north and west of the coastal village of Korphos has indicated that the area also had significant activity in the Early Bronze Age and rather little activity thereafter. Extensive survey of the hills and valleys surrounding Korphos has produced additional evidence for a vital Bronze Age landscape suggesting that the region was a particularly prosperous and well-developed corner of the busy Saronic world.

On a personal level, the documentation of activities in this area is interesting because the site of Lakka Skoutara where David Pettegrew and I have worked for close to a decade is just a few kilometers (as the crow flies) from their study area. The publication of the ancient, medieval, and modern landscape of Kalamianos and surrounding regions will form a key anchor to our analysis of Lakka Skoutara.

The most interesting thing to me is the methods used to document the site and the extraordinary transparency of the authors in describing their procedures. The integration of architectural, extensive, and intensive survey in a methodologically consistent treatment of a single area.  The use of kite and balloon photography to assist in documenting the visible architecture produced some rather striking images that were effective in conveying both the methods and the character of the preserved architecture.

Over the course of intensive survey, the SHARP collected ceramic material using the chronotype system from both specific rooms within clearly defined buildings and across survey style transects. Using a gridded system for the most part, their work follows a similar approach our large site in Cyprus, and this is unsurprising since both David Pettegrew and myself learned the craft of survey from Tom Tartaron, Daniel Pullen, and Tim Gregory over the course of the Eastern Korinthia Archaeological Survey.  When the final results are published, the survey work at Korphos will represent another good example of the “4th Wave” intensive survey in Greece which tends to focus intensively on single sites or microregions of a few square kilometers rather than the large areas typical of “Third Wave” regional survey in Greece. 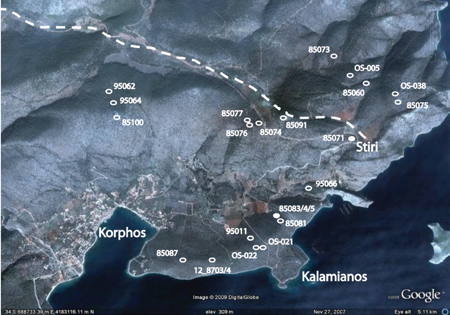 I was gratified to see that their systematic extensive survey produced a preliminary map (above) of the strange round enclosures found on numerous height in the area. In his preliminary study of these enclosures, M. Dixon argued that they were Classical or Hellenistic in date and represented a series of ad hoc fortifications designed defend a vulnerable landscape from the historically documented threat of the Athenian fleet (in the Classical Age) and the more persistent threat of local raiding during the unstable Hellenistic centuries. The SHARP team found little to support a Classical or Hellenistic date for these enclosures and, noting the absence of any substantial quantity of ceramic material, preferred an Early Bronze Age date on the basis of a few sherds found wedged in the walls.

I had the opportunity to look at some of these strange little “fortifications” first hand about a decade ago while documenting the site of Lakka Skoutara. The absence of ceramic material from these sites is, indeed, vexing. And a few Early Bronze Age sherds do little more, at present, than provide a terminus post quem for these rough enclosures.

There were any number of interesting tidbits from their preliminary publication, but a few really stood out to me:

First, I was pretty interested to see that they used the absence of later pottery collected by the survey to argue for the absence of later activity at the site. To my mind, this is an important step for the field of survey archaeology. We are often relatively confident in arguing from the presence of activity based on the presence of ceramics, but we rarely have taken the next step. The vagaries of site formation and the differential visibility of various periods in the surface record have usually led us to stop short of making arguments ex silentio.  But, I suppose the extraordinary geomorphological stability of the landscape around Korphos provided them with the confidence to make this claim.

Next, it is remarkable, however, that there is very little discussion of Byzantine material. The site of Stiri features a significant Middle Byzantine church dedicated to the Panayia. It was the katholikon of a monastery that may have been visited by Os. Loukas and is attested in census records as late as the 18th century.  It probably functioned in some capacity into the 19th century. Remarkably, the area around the church which is strewn with important Early Bronze Age remains seems to have produced almost no Medieval pottery (according to their admittedly preliminary report). This may be the result of local geomorphological activity – the church site in a polje filled with sediment that may have covered the Byzantine surface – or perhaps a preference of non-cermaic material at the site during the Byzantine period (although this seems a bit unlikely).

Finally, it is a bit troubling, however, to imagine a Byzantine church leaving almost no trace in the local ceramic assemblage and, then, using that same assemblage to date walls visible on the surface. I have no reason to doubt their confidence in assigning Late Bronze Age or Early Bronze Age dates to features in the landscape, but I anxiously await a more systematic treatment of their results to understand the complexities of site formation in this area.

In my informal visits to the area over the years, I’ve seen significant evidence for Late Antique activity in the area including some Early Christian mullions at the church of Ay. Pantes in the village of Korphos itself. It was interesting to note that the SHARP team found a Late Roman kiln site amidst the ruins. Their suggestion that the center of habitation in the region moved to the location of Korphos town during antiquity seems plausible.

One last thing: the color photographs and illustrations in the article are fantastic!

Crossposted to New Archaeology of the Mediterranean World