I always request a window seat when I fly in and out of Athens International Airpot on the hope of capturing good images of the Corinthia. Photographer and archaeologist Jacquelyn Clements shared with me the image below from her flight in December 2013 (and kindly gave permission to share on this site). The beautiful photo clearly shows the constricting neck that defined the Isthmus in antiquity. The ancients, of course, never had this particular aerial perspective of the Corinthian Isthmus but they did have a bird’s eye view from Mt. Gerania, Oneion, and Acrocorinth, as well as the practical experiences of coastal navigation. Until the later Hellenistic era, most Greek writers conceived of the Isthmus as the zone of greatest constriction between Akra Sousaki and Akra Sophia on the Saronic Gulf, and Loutraki and New Corinth on the Corinthian Gulf–the landscape shown in the photo below.

Another disappointment in not attending this year’s meeting of the Archaeological Institute of America was missing an interesting paper by Angela Ziskowski and Daniel Lamp about access and movement to the Perachora peninsula. Disappointed especially because I’m currently wrapping up a book chapter on the connectivity of the Isthmus, and the Perachora peninsula has a dramatically different topographic structure than the Corinthian lowland to the south. But disappointed also because many years ago, when I was less familiar with local bus lines, the bus dropped me off in the modern village of Perachora in the center of the peninsula, from which I walked several hours overland to reach the sanctuary of Hera.

In the fall, I had some good exchanges with Angela and Dan about aspects of their research. Dan is a professional architect at OPN Architects in Iowa and helped me figure out how to translate Corinthian topography from DEMs to ArcGIS to CAD. Angela, a history professor at Coe College, recently completed her PhD dissertation on Corinthian identity in the early Iron Age and Archaic era, and told me a bit about their work last summer. They kindly offered to share their research here at Corinthian Matters.

The AIA paper is titled “The Perachora Peninsula and the Sanctuary of the Heraion: You Can’t Get There from Here.” Looking forward to the publication already. Their overview starts here.

Sometime during the eighth century B.C. a sanctuary to the goddess Hera was constructed at the tip of the rugged and remote Perachora peninsula. The location of this sanctuary, known as the Heraion, is both dramatic and strategic. Standing at the tip of the land mass, on a clear day one can see across the Gulf of Corinth south to Acrocorinth, north to the coast of Boeotia, and a good percentage of the Geraneia mountain range to the east. As luck would have it, one of the only natural harbors in the area is found at the foot of this site. In many ways this is an obvious choice for a religious sanctuary or military outpost, and was held by Corinth throughout the city’s history. 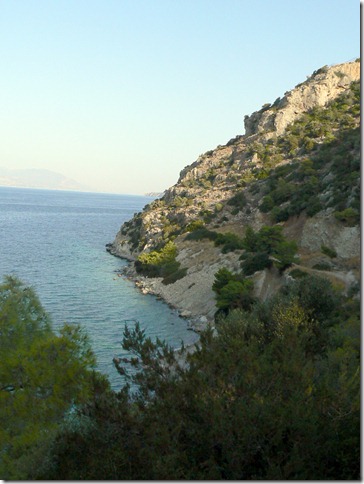 Figure 1: View indicative of the topography along the south coast of the Perachora Peninsula.

This site’s one drawback is formidable; this location is so dramatic and strategic in part because it is so unreasonably difficult to access. In fact, the land mass as a whole is difficult to reach, even today. The Perachora peninsula is a rocky mastiff defined by the steep ridges of the Geraneia range meeting the Gulf of Corinth at slopes that are nearly impassable. The south coast in particular is marked by an alternation of steep ridges, some approaching 50 degree slopes that drop precipitously into the Gulf, and deep, dry gullies in the valleys between that can be equally steep. (Refer to Figure 1.) The eastern edge is guarded by the Geraneia Mountains and the high ridge over modern-day Loutraki meets the plain very abruptly. Compounding the problem of access to the peninsula and sanctuary is the fact that the aforementioned natural harbor, so fortunately situated near the tip, is quite small and not suited for commerce. Thus, this site was not ideal for seafaring and a daunting overland trip from the political center at Corinth.

Despite the difficulty of travelling to Perachora, archaeological and textual evidence suggest that many groups of users did so, for a variety of purposes, and frequently. These users include long-distance sailors from the Near East, local pilgrims worshipping Hera at the sanctuary, and military campaigns such as those of the fourth century B.C. general, Agesilaus. In fact, it was the objective of that attack on the peninsula to deprive Corinth economically of cattle and timber, which itself suggests a population of permanent residents exporting resources to the capitol on a regular basis. It is incorrect to suggest that because this area is remote it was also unimportant; this area saw a fair amount of travel in antiquity despite the difficulty involved, which is an interesting paradox.

Furthermore, the specific routes employed by these users are worthy of study in and of themselves because neither land nor sea approaches to the peninsula offer easy access to the area. For instance, worshippers of Hera from Corinth probably reached the sanctuary on foot along a route that ideally would have hugged the coast as closely as possible to limit the overall length. Previous scholarship on the topography of the landscape has largely relied on the account of Xenophon, who traveled with Agesilaus’ main force during his invasion. He claimed that a route along the coast existed in antiquity and that his troops moved from the area around Loutraki to the sanctuary (and back) in a single day. Our topographic research and analysis of the peninsula demonstrate that such a route was unlikely, if not impossible. Thus, any pilgrims, traders, or invaders travelling on foot between Corinth and the Heraion likely did not follow a route “by the sea” as Xenophon writes, but likely a more complicated inland route suggested in Figure 2. On the other hand, the Near Eastern offerings at the sanctuary likely were dedicated by sailors who were moving in and out of the Gulf on ships. Again, sea access to the sanctuary and peninsula was limited by the lack of a sizable natural harbor. Smaller ships, and only three or four at most, could put into the harbor at the sanctuary, but it is likely that the site was accessed routinely from the sea. In short, we have evidence for many users and no good means of access for them. 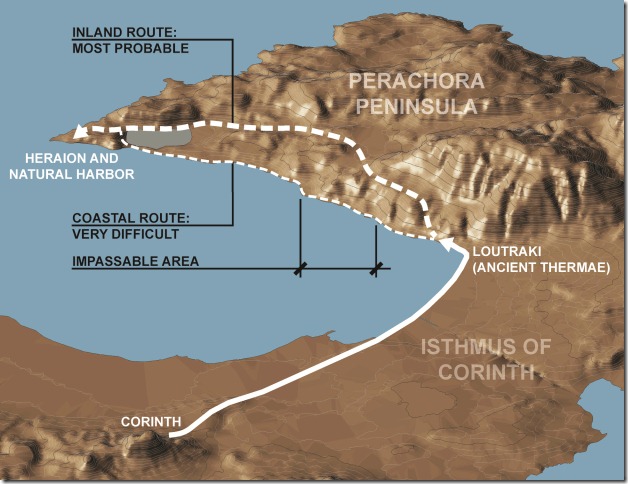 Figure 2: Topographic representation of the Isthmus of Corinth and Perachora Peninsula, indicating an unlikely coastal route and a more likely inland route away from the seafront. Note the vertical contours are exaggerated by a factor of 2 in order to show the topographic changes more vividly.

Perachora and the sanctuary on it were far more difficult to access than previously understood. More consideration should be paid to the remote nature of the sanctuary and to the investment of time and energy needed to reach it. It is particularly meaningful that a diverse group of users expended substantial effort to access this area. We will address the topographic difficulties of the peninsula, the user groups in question, and the implications of the remote nature of the sanctuary in a paper at the AIA this January and in an article in progress now.

The revolution of YouTube and video sharing has ushered in a whole new world of viewing the Corinthia.  Already hundreds of videos can be found online related to the site of ancient Corinth—too many, in fact, to be useful to a person interested in ancient Corinth.  I plan at some point to do a series of highlight posts that feature the most useful gems among the noise.

The two videos below, which showed up in my Google Alerts this morning, provide low-altitude video footage of the Isthmus.  The first begins near the canal on the Corinthian Gulf, flies over Loutraki, then Mt. Gerania along the coastal road that leads to Perachora, and ends with a flight over the canal approaching the Saronic Gulf.  You cannot make out Isthmia in the video, but there are fantastic views of the Corinthian Gulf and Kalamaki Bay, a point of arrival for ancient visitors to Isthmia.

Sweet glider video over the Isthmus

The second video shows a flight over the Corinth canal.  At the end of the video, as the glider approaches the Corinthian Gulf, you can see the path of the diolkos running through a clump of pine trees on the right side of the canal.  This is the inaccessible part of the diolkos through the Greek Military Engineers’ School ground.  You can also see the Peloponnesian section of diolkos on the left side of the canal.