Since 2007, Corinth Excavations Assistant Director Dr. Ioulia Tzonou-Herbst has been leading outreach efforts on-site in Ancient Corinth, Greece. In fall 2014, Corinth Excavations received a grant from the Steinmetz Family Foundation to develop further outreach opportunities and create educational materials for school audiences in the United States and Greece. The result is a variety of lesson plans on themes and topics related to Greco-Roman classical civilization and the Medieval Mediterranean world.

The purpose of the lesson plans as outreach is to bridge a gap between primary research by archaeologists on the site of Ancient Corinth and teaching of the past in the classroom.  We wish to communicate knowledge gained by excavation and research of ancient remains and material culture to educators and learners of all ages, primarily following middle school social studies (or interdisciplinary) learning standards. The lessons cover topics from water management  to religion, trade, diet and disease, making them marketable and usable for a wide audience of educators, and using artifacts excavated in Corinth, Greece, dating from the Classical to the Byzantine periods (roughly 500 BCE to 1450 CE) as a foundation for learning. Additionally, the lessons incorporate images, digital modeling technology, videos, texts, and excavation reports where applicable. A special learning opportunity we call “Digital Field Trip to Corinth” includes an in-depth, behind-the-scenes look at the archaeological park of Ancient Corinth to help students extend previous learning experiences on Greco-Roman classical civilizations and the Medieval Mediterranean world during their classroom studies.

Check out the full description here, which includes links to lesson plans  such as Kudos to the folk at the Corinth Excavations for launching and promoting this initiative. As the lesson plans are very detailed (15 pages or more), this will be an excellent new resource for teaching students about Ancient Corinth. 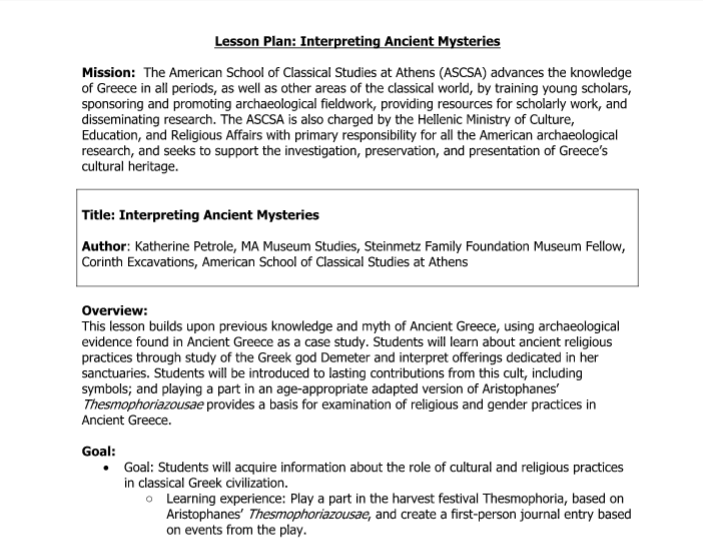