Over the last day or two, I’ve been telling the conquests of Niketas Ooryphas, the terrifying Byzantine admiral who delivered the shocking attack on the menacing Cretan pirates in the Corinthian Gulf in the late 9th century AD.

The Cretan pirates: from the Madrid Skylitzes manuscript

The story is based on several translated texts of Byzantine date:

On Wednesday, I presented in a post the basic problem the portage event creates for the interpretation of the diolkos road: if Niketas really dragged his fleet, then it means the old portage road of Corinth was still in use 1500 years after its construction, or had been put back in use since antiquity.

In my paper on the subject at the Archaeological Institute of America, I provided a series of arguments against Niketas dragging his fleet over the Isthmus in AD 972.  Here is a summary of the first part of my argument against the historicity of the portage:

1. First, the account is embedded in the Life of Basil, a text sponsored by the Byzantine Emperor Constantine VII Porphyrogenitus (I love that name: “born in the purple”) to praise the activities of his grandfather, Basil I.  One should perhaps be a little skeptical about an unbelievable deed in a document intended to praise the actions of the emperor’s grandfather, written 75 years after the event described

2. One should also be somewhat skeptical about accounts that describe the overland movement of large ships as a simple matter.  Our ancient sources consistently describe beaching or launching military ships in antiquity as difficult activities requiring tremendous effort.  So much more difficult it was to move ships long distances overland!  The standard Byzantine military vessel, the dromon (see image), was over 30 m long and 4 m wide and high, and weighed many tons.   For some comparative modern perspective, these figures are about twice the length and width of an 18 wheeler tractor trailer truck.  To haul an entire fleet of these ships over the isthmus in a single night would have been an incredible fleet.

3. The Corinthian Isthmus seems narrow and flat from Acrocorinth, but spans 7,000 meters across and climbs steeply from sea level to an elevation of 85+ meters at the spine, creating a grade averaging over 2%, increasing the necessary required traction force for the portage significantly.  The land bridge could only have created very real difficulties for moving large and heavy vessels. 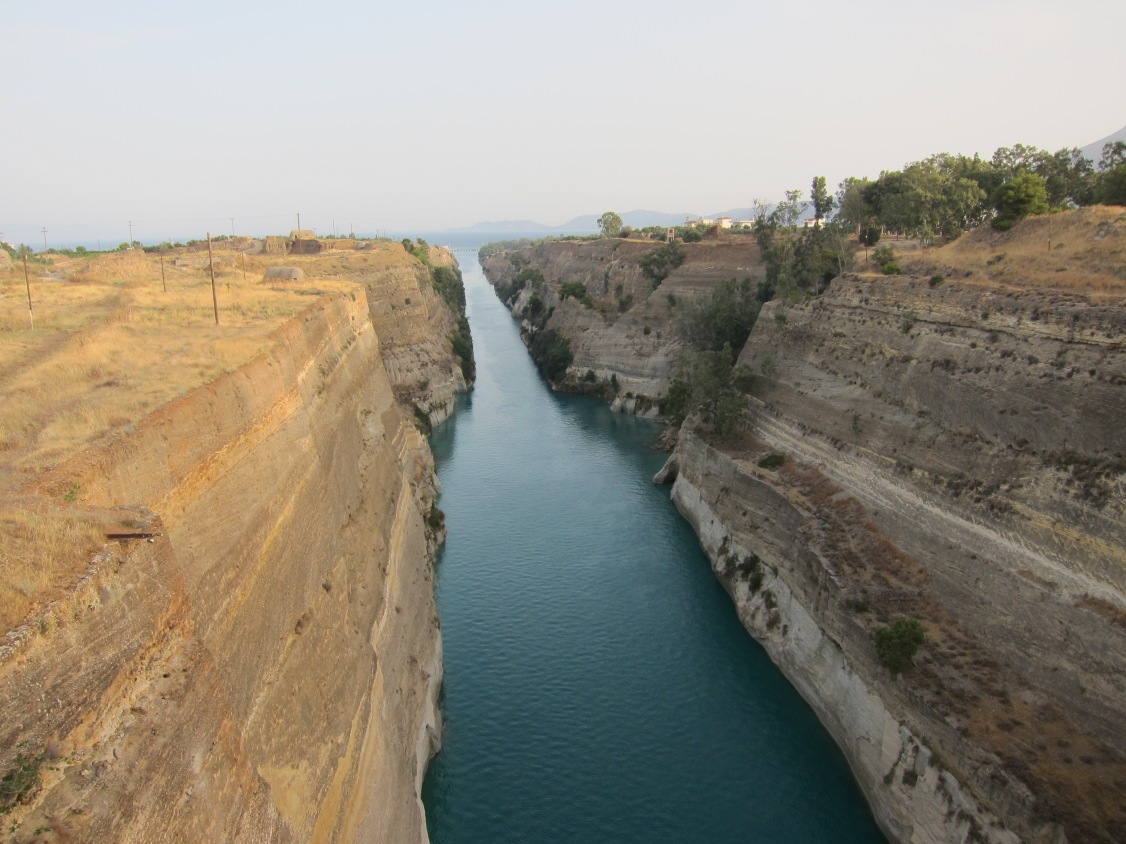 4. Our most reliable ancient accounts of ship portages over this Isthmus describe the feat as a time-consuming and costly endeavor.  Thucydides notes that in 428 BC, the Peloponnesians had to prepare hauling machines to convey ships across and that the Spartans worked busily to build them.  Polybius suggests that Demetrius of Pharos’ transfer of vessels in 220 BC came at some significant cost in money.  And a remarkable inscribed poem from Corinth recording the transfer of Marcus Antonius’ fleet in 102-101 BC characterizes the deed as a heroic feat remarkable in that it was “accomplished within a few days with little confusion, and with great planning and safety.”

These accounts suggest that dragging a fleet was an incredibly involved affair that required minimally a hard road surface, the preparation of wheeled sleds or wagons for moving the vessels, and some time.  The notion that Niketas Ooryphas transferred 100 ships in the darkness of a single night does seem most improbable.

On Monday, I’ll deliver the final installment of the Niketas Ooryphas adventures and try to place him and his portage into a 10th century context.