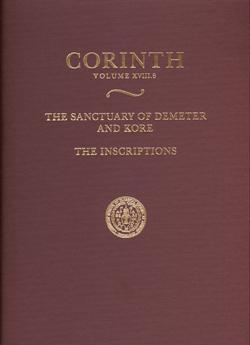 Just saw the good news that Ronald Stroud’s volume (Corinth XVIII.6) on the inscriptions from the Sanctuary of Demeter and Kore on the lower slopes of Acrocorinth is now published and available for purchase. Details below from Andrew Reinhard at the ASCSA Publication Office.

Excavations conducted by the American School of Classical Studies at Athens in the Sanctuary of Demeter and Kore on Acrocorinth, 1961–1975, produced more than 170 inscribed objects of stone, bronze, bone, lead weights, pottery (graffiti and dipinti), clay pinakes, magical lead tablets, and an inscribed mosaic. In this new Corinth volume, Ron Stroud presents all of these inscriptions, and he relates them to an overall interpretation of the activities, secular and religious, attested in this shrine during its long period of use from the 7th century B.C. until the end of the 4th century A.D. Where possible, Stroud also draws out their implications for and contribution to the history of ancient Corinth, the worship of the goddesses Demeter and Kore, and the practice of magic—especially in the Roman period. This is the final publication of the inscribed objects from the sanctuary, excluding loomweights and stamped amphora handles, which will be included in a later publication.

Chapter 1: Inscriptions on Stone, Metal, Bone, and in Mosaic

Click here to read an interview with the author.

Click here for information on how to order this book.