Last Friday, the Medieval and Post-Medieval Archaeology in Greece Interest Group co-sponsored a colloquium in two sessions at the Archaeological Institute of America on the theme of “Deserted Villages.” The first session was devoted to the subject of villages before abandonment and included papers on “The ‘Dead Villages’ of Northern Syria” (Anna M. Sitz), “Village Desertion and Settlement Patterns in the Early Medieval Fayum, Egypt” (Brendan Haug), “Abandoned ‘Palaiomaniatika’ from Ottoman Defters, Aerial Survey, and Field Reconnaissance” (Rebecca M. Seifried), “The Deserted Village of Anavatos on the Island of Chios, Greece” (Olga Vassi), and “Routes and Abandoned Villages in the Western Argolid” (Dimitri Nakassis, William Caraher, Sarah James, and Scott Gallimore). The second session was devoted to villages during and after abandonment, and included papers

As Deb Brown’s and Kostis Kourelis’ abstract for the second session describes,

Each paper thoughtfully considers abandonment and post-abandonment histories traced through years of documentation and investigation of structures and settlements that were abandoned or partially abandoned in the 19th and 20th centuries. Each case study includes evidence from historical documents, photographs, and oral histories to offer a more nuanced understanding of the reasons for abandonment, behaviors associated with deserted villages and rural structures, and significance of deserted villages in cultural landscapes. The combined papers contribute new material for understanding protracted abandonment and postabandonment processes and have significant implications for archaeologists’ interpretation of landscapes, settlements, buildings, and assemblages.

I wasn’t able to attend but heard from friends that the colloquium was successful, and that the double session was audio recorded and will be released soon via the internet. I myself co-wrote a paper with friend and colleague Bill Caraher on Lakka Skoutara, an almost deserted (almost) village of the southern Corinthia. Bill and I have visited the little valley of LS about six different summers over the last fifteen years, together with collaborators Tim Gregory and Lita Tzortzopoulou-Gregory. A few years ago, we presented a paper about LS at the Modern Greek Studies Association biennial conference, and we’ve put together a substantial draft of an article to submit somewhere sometime soon. In Friday’s paper, we tried to show some good pictures of the slow abandonment of this settlement that began, arguably in the 1960s (!), and continues to this day. There are as many signs of life in this abandoned valley as there are signs of death.

Some images from our paper Friday. If you’re interested in seeing more, Bill has posted 620 photos via the archival platform Omeka. Here are some of images from Friday.

Below, Mr. Perras and donkey pose in front of Perras’ long house, still standing last we checked. Mr. Perras commutes frequently to visit the country house from the nearby village of Sophiko. Note the storage of an older set of tiles (provisional discard) in front of the house.

The valley of Lakka Skoutara is just east of Sophiko and north of Korphos in the southeast Corinthia.

We have counted 18 houses, house foundations, or storage buildings in the valley, plus a little church. There are numerous little agricultural valleys in the Corinthia and Argolid, which attracted seasonal or permanent habitation in the 19th and 20th century. LS was mostly seasonally inhabited except during the hard times such as World War II when settlement was more permanent.

The table below shows that most of the houses correspond to the Balkan-style “long house” type.

Many of the buildings today (or at least in 2012, when we were last there) look like this. They have lost their roofs and are quickly collapsing. When the former owner saw his house like this in 2005, he was moved to tears (he had not visited the house in years). This house also shows the mixed style of the later 20th century, which included traditional fieldstone construction combined with concrete cinderblocks. The feature in front of the house is a large cistern.

Another image of collapse. Archaeological site in formation.

The interior of another house which still stands and functions for seasonal work reveals a basin and provisional discard (tiles). 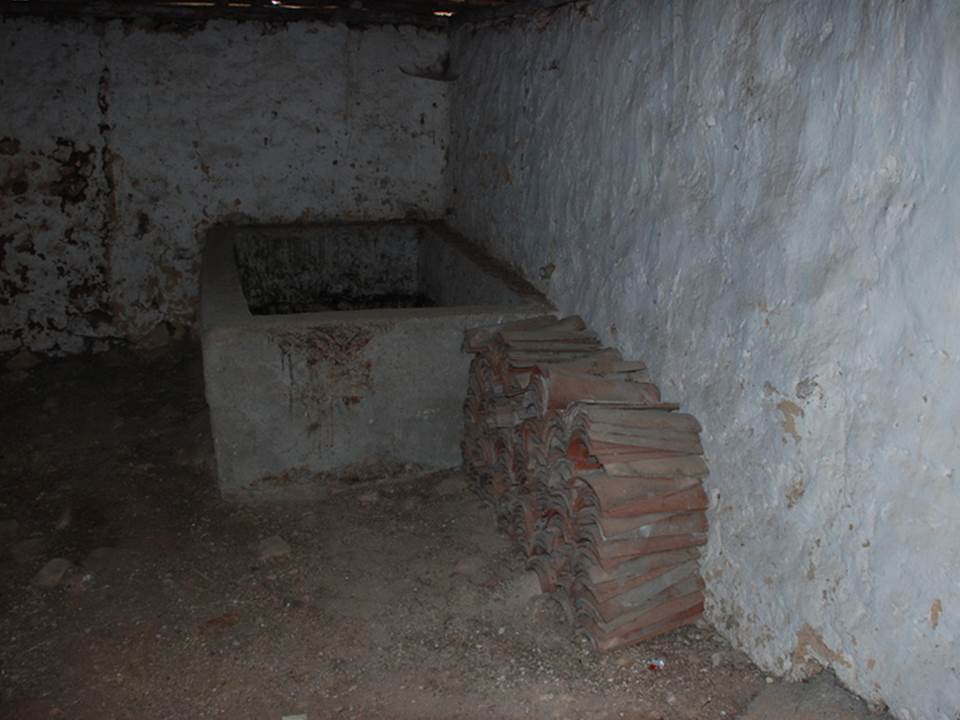 The next three images show how quickly these abandoned houses can change. The first one shows a house with a full set of tiles in 2004, and the second and third show the house robbed of tiles by 2005. Very few of the houses had significant artifact assemblages associated with them. Most were depleted of material during or after abandonment. 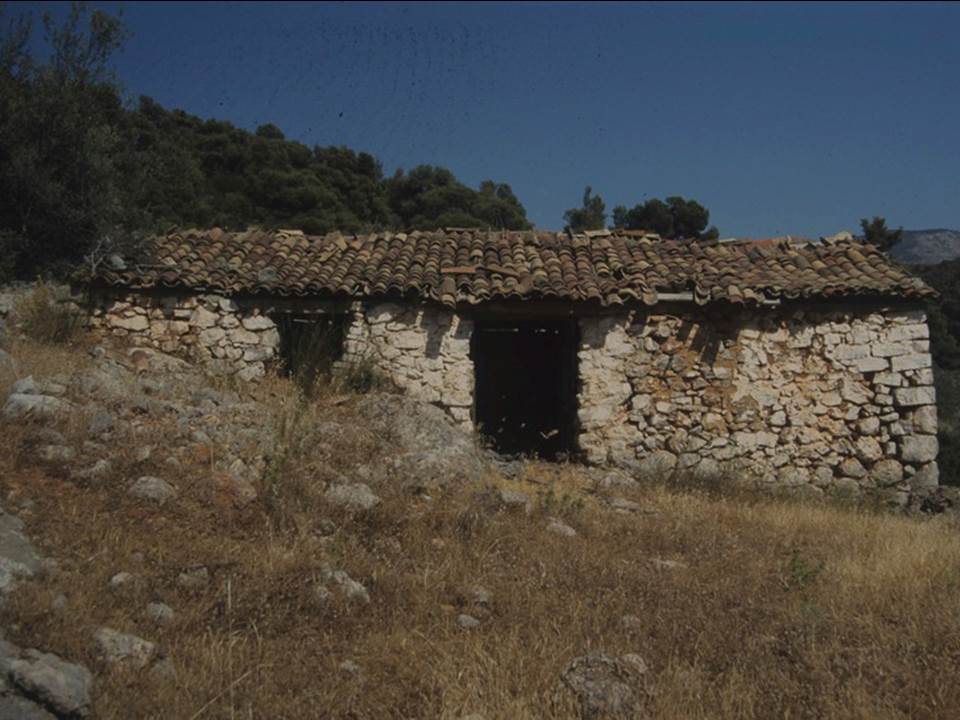 Another good sequence of collapse. The still standing building was being reused as an animal pen the first time we visited the valley. It then began to collapse. 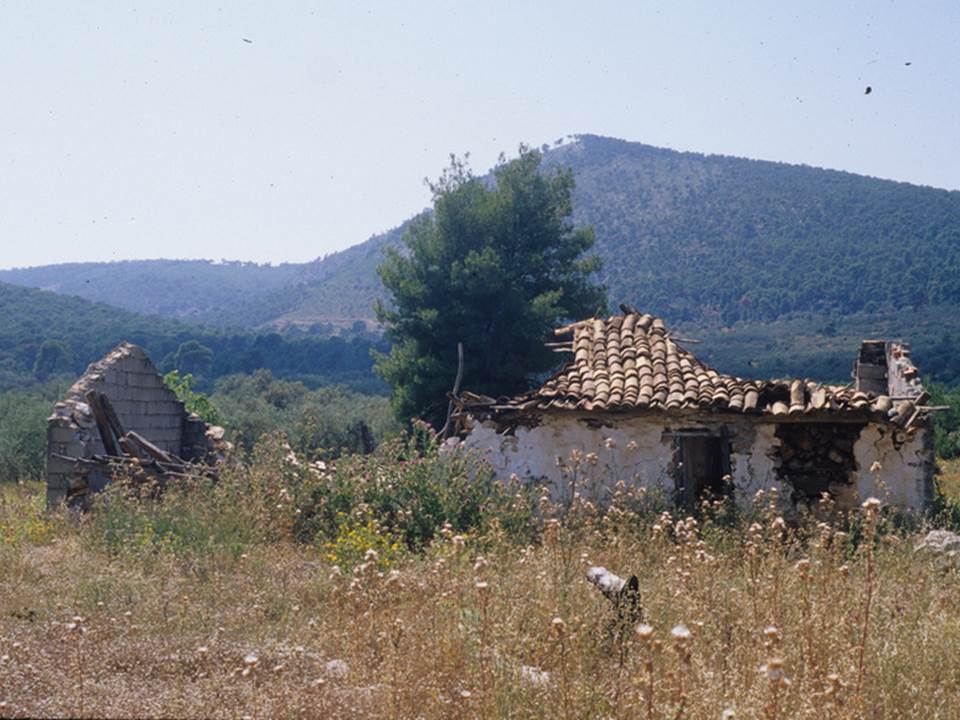 Collapse continued and worsened by 2009.

But today, it’s still in use by an area shephered, who makes use of the well associated with the house. 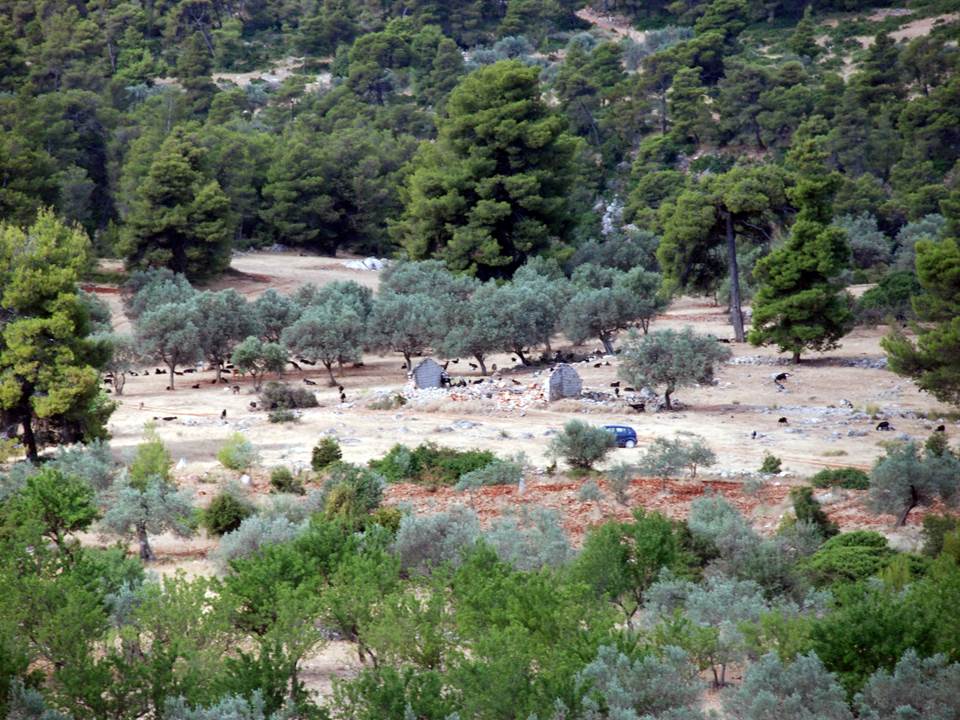 If the audio for these sessions should go up in the next month or so, I’ll post a link.