Planning a trip to the Corinthia soon? The Greek Ministry of Culture and Sports has been slowly adding data since 2012 related to the major sites of the Corinthia through their ODYSSEUS Portal. Posted information includes access and hours, ticket pricing, student discounts, amenities, suggested bibliography, among others. Mind you, hours and times are subject to change, but the information will at least get you in the ballpark. There’s a small collection of images associated with the site pages. Check out this beautiful aerial photo of Lechaion harbor from the Lechaion Port page.

I have added these links to a new sidebar titled “Corinthian Sites – Hours and Access”.

Caveats added Feb. 27 from G. Sanders’ comments on the Corinthian Studies Facebook page: If you’ve been to Corinth before, don’t count on the old way of getting there. The bridge was just removed at the exit to (ancient) Corinth to widen the Athens-Patras highway. If you stay on the highway to Patras, you’ll have to double back at Kiato. To arrive at Corinth, exit at the Isthmus, or take the exit to New Corinth (the first exit after the Isthmus). If you exit to new Corinth, turn left and then make a hard right, or make a right and then left past the train station.

Re: hours. New guards are being hired and the site will be open 8 AM to 8 PM during summer months.

“This past summer was hot in Corinth, the hottest I remember since I arrived in 2001. Summers are busy and fascinating, full of discoveries. After the excavations finish at the end of June, the hostel is emptied out and we say our goodbyes to the Regular Member excavators. Their stories of digging are added to the long, long history of generations of excavators. The rooms are filled once again, with a different crew this time. Starting July 1, a wise and stimulating group of people gather in Corinth: professors and researchers who dug different parts of the site come back to make sense of their discoveries.

Our days are spent working in the museum. The short working hours of the museum this year put pressure on resident scholars to work straight through lunch, ‘doing the Mary’ and having a late lunch, which they considered a sacrifice that would please Demeter. Plenty of study and discussion took place in the afternoons in Hill House library and into ouzo time on the terrace overlooking the Corinthian Gulf.”

Museums are increasingly posting collections of images and artwork online which, on occasion, deal with Corinthian topics.  In the midst of the end-of-semester madness, I learned of Tate’s extensive online collection of art through alerts sparked by the posting of Corinthian images on a new beta site (to replace its current digital collection).

The current digital collection turns up a few additional Corinthiaka images that are probably soon to be transferred to the new site.

I couldn’t make it last week to Grand Forks to hear Franklin & Marshall College professor Kostis Kourelis speak on the topic of Byzantium and the Avant Garde.  Thanks to Bill Caraher and the Center for Instructional and Learning Technologies at the University of North Dakota for streaming the lecture live.  The video, audio, and presentation are all available here.

Readers of Hesperia, the journal devoted to publishing the research of the American School of Classical Studies at Athens, will recognize Kourelis’ talk as a “live version” of an article published several years ago called “Byzantium and the Avant-Garde: Excavations at Corinth, 1920s-1930s,” Hesperia 76 (2007), pp. 391-442.  Hesperia has, in fact, made that article available for free download on this page.  The abstract of the article also works as a summary of his talk last week:

“In the 1920s and 1930s, members of the American School of Classical Studies at Athens engaged in a dialogue with the avant-garde through the shared discovery of Byzantium. This extraordinary experiment took place in excavations at Corinth, where American archaeologists invented the systematic discipline of medieval archaeology, facilitated an inclusive identity for the American School, and contributed to a bohemian undercurrent that would have a long afterlife. This article situates the birth of Byzantine archaeology in Greece within the general discourse of modernism and explores the mechanisms of interchange across disciplinary and national boundaries, between subjective and objective realms.”

In a nut shell, Kostis argues that the traditional disdain for Late Antique and Byzantine archaeology by classical archaeologists working in Greece was not always a consistent thread of American classical archaeology.  Just as societal processes shaped the veneration of the classical past in the late 19th and early 20th centuries, so a range of broader factors—early 20th century aestheticism, architectural trends, the artistic avant-garde, and the mental association of Byzantium with modernism—led briefly, in the 1920s and 1930s, to an interest in the Byzantine period.  Many early excavators, draftsmen, architects, and illustrators working in Greece (Lucy Talcott, Alison Frantz, Piet de Jong) during these decades had links to the Greek avant garde who were also newly interested in the Byzantine tradition.

As Kourelis says at one point, a generation of Americans who went to Greece looking for the Parthenon ended up discovering the Medieval period.  This broader intellectual inclusivism of Byzantine Corinth was short-lived (dying with World War II and the Cold War politics that followed: think Byzantium and Russia) but eventually did reemerge in American researchers circles in the 1980s.  Think in recent decades: Charles Williams II, Timothy Gregory, and Guy Sanders.

Here’s what I think could be especially valuable in his lecture and article for a non-specialist audience:

1. This is a great little overview of the way that culture has historically influenced archaeological practice.  People often think of archaeology as a flat scientific enterprise—as though archaeologists excavating in Greece were all “objective” researchers simply carrying out their work for the sake of generating knowledge.  Here we meet archaeologists influenced by broader trends in attitude and practice toward particular periods.  As Kourelis puts it in his article (p. 393):

“Ultimately, it was the artistic avant-garde that ushered Byzantine Greece into the cultural limelight and rehabilitated its research within American priorities. Corinth’s medieval excavations of 1925-1940 were conceived under the spell of modernist aesthetics and much less under the guidance of academic inquiry.”

2. For anyone unfamiliar with the history of excavation, it is easy to forget that the ruins of Roman Corinth visible today at the site were once covered by an incredible amount of post-antique material and settlement.  This “Byzantine labyrinth of houses” was cleared in the central area to get down to the Roman levels.  The discoveries of the Byzantine city were published in several Corinth volumes, and the article provides a useful summary of that process.

3. Great images and plans of excavations at Corinth in the 1920s and 30s.  Also pictures of the reconstructed Byzantine house (once a museum) near the Peirene spring now known as “Carpenter’s Folly”.  The lecture and article explain the source of the name “folly”.

4.  There’s some stuff here (beside the above) for New Testament scholars.  St. Paul’s Cathedral in New Corinth itself dates to 1930 and reflects the same trends in Greece.  Kourelis provides a good quote by Henry Miller from the 30s on a lush corrupt sexualized Corinth.  That image of the city is an old one.

For further discussion, see the online lecture or publication.  Kostis blogs at Objects-Buildings-Situations.

The Department of Archaeology at the University of Amsterdam recently launched a new website “Byzantine & Ottoman Archaeology: Digging up answers in the Medieval Mediterranean”  as the official site for their VIDI-Research Project on material culture in the eastern Mediterranean after antiquity.  The project researchers Joanita Vroom, Fotini Kondyli,  and Yasemin Bagci are examining the ceramic artifacts at four major settlements of the Byzantine and Ottoman Mediterranean including Athens, Butrint, Ephesus, and Tarsus.

A little over a week ago this Amsterdam group hosted their conference, “Fact and Fiction in Medieval and Post-Medieval Ceramics in the Eastern Mediterranean – Are we on the right track?,” with papers exploring the relationship between ceramics and coins, and pottery and identity.

Corinth enters the picture because the conference organizers chose the time of the conference to launch a new exhibition at the the Allard Pierson Museum of the University of Amsterdam called Life among Ruins: The Eastern Mediterranean in Word and Image (ca. 700 – 2000 AD).  The exhibition, which will be on display from October to late January, explores the interaction of post-antique populations with the antiquities that always surrounded them.  The exhibition includes photographs of the ASCSA excavations in the Athenian Agora from the 1930s-1950s and “drawings, sketches and maps of European travellers, who visited the Eastern Mediterranean between the 17th and 19th centuries. These illustrations come from printed books and maps of the ‘Bijzondere Collecties’ of the University of Amsterdam”. 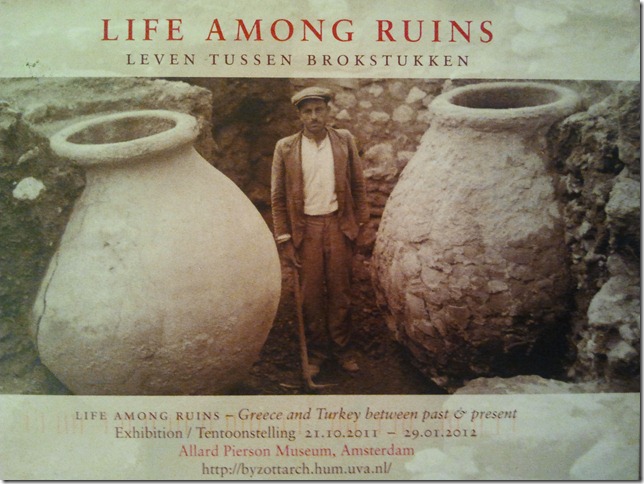 The first illustration one sees at the site is a drawing of the Temple of Apollo against the background of Acrocorinth.

The image comes from John H. Allan’s A pictorial tour in the Mediterranean: including Malta, Dalmatia, Turkey, Asia Minor, Grecian Archipelago, Egypt, Nubia, Greece, Ionian Islands, Sicily, Italy and Spain (London, 1845, 2nd edition).  The drawing shows literally “life among ruins” as several men, a horse, and donkey casually interact over the buried remains of the Temple of Apollo, with a few scattered houses in the background below the slopes of a towering Acrocorinth.  The Temple of Apollo and Acrocorinth with its fortifications are the backdrop to human interactions and habitations.  To see the image and others in the catalogue, check out the website here.

When I was in Corinth in early June, a news item going around the village was the imminent arrival of Archaic-period kouroi to the archaeological museum at Corinth.  The statues, depicted in the images below (from Greek Reporter and Athens News), were found in Klenies (see map below), a village of the southern Corinthia near ancient Tenea.  Dug up by antiquities dealers, who were trying to sell them for 10 million Euros apiece, they were confiscated by police last October and arrived last week in Ancient Corinth where they will be on display. The Greek Archaeological Service has since conducted excavations at the Archaic and Classical period cemetery in which they were found.

Thanks to Kostis Kourelis for alerting me on the Kathimerini story.

A recent article from the Greek Reporter highlights the photographic exhibition of James Robertson at the Benaki Museum:

James Robertson was one of the first prominent traveler-photographers to depict scenes of mid-nineteenth century Greece. Of Scottish descent, he has been identified as the engraver James Robertson, who worked in London around 1830. He first settled in Constantinople in 1841, where he spent forty years of his life working as a master engraver in the imperial mint. His photography career began in the early 1850’s when he opened a photographer’s studio in Peran, the European district of Constantinople. He died in 1888 in Yokohama.

James Robertson’s collection of photographs of Greece was published simultaneously in London and Constantinople. One of the few remaining portfolios (44 photos) entitled “Photographs by James Robertson, Athens and Grecian Antiquities” was donated by Rena Andreadi to the Photographic Archives of the Benaki Museum where it is treasured as a precious historical document and a rare example of early photographic art.

The exhibit, which includes photographs of the Temple of Apollo in the early 1850s, will run until August 21.  See the description at the Benaki Museum website.

I recently stumbled across a gallery of digital images called “In the Steps of Pausanias: In Korinthia,” which contains about 500 images related to Korinthiaka.  The gallery appears to be growing.  This is not your typical “I went to Ancient Corinth and took lots of photos” photo gallery but rather contains images of the sites and museums of Corinth, Isthmia, and Nemea, Kenchreai, Krommyon (Ay. Theodoroi), the canal, Acrocorinth, and even the Sousaki volcano.  The sponsoring organization is the Hellenic Electronic Center:

Since some of these Corinthian sites are off the tourist path, and some of the museums are frequently closed (Isthmia Museum), this gallery offers a useful repository of images related to Corinthian archaeology.