When I attended the THATCamp Philly in September 2011, I listened to a presentation by Dianne Dietrich about the value of programming for teachers and researchers in the humanities: the goal is to avoid processes that can be done automatically. If you have to repeat a step more than 3 times, she said, you should look for an automative process. I’ll admit that I was a little lost in the ensuing discussion about programming basics and in the subsequent session about XML, nor was I was the only one—the dean of humanities at my college, Peter Powers, caused a twitter storm when he later admitted that the THATCamp experience was somewhat inaccessible (and would be for many humanities faculty). One thing I took away from the conference, however, was that it would be a good idea some day soon to take a basic programming class and that I should be on the lookout for automative processes that save time. My work with Zotero this fall confirmed that conclusion. Creating a massive digital library of ancient texts (which I’ll write about soon) would certainly benefit from knowledge of basic programming.

Enter GIS and topographic world (and GIS experts will no doubt laugh at my folly here). If you’ve followed this website, you may recall my post last spring about the progress we were making in creating higher-resolution topographic layers for the Corinthia. Over the last couple of years, I have been slowly chipping away at 20 meter contours for the region based on the Greek 1:50,000 topographic maps. Digitizing a topographic map of the Corinthia in this manner is an extremely slow process as you follow contour lines of the map with your mouse and click click click along them to trace a digital copy – note the red “digitized” lines in the image below and the squiggly contour lines in gray /black that are not digitized.

A handful of students at Messiah College had made slow progress on the topographic map over the last couple of years with this tracing method. The students benefited from getting to work with ArcGIS and we worked slowly toward completion of a worthwhile project. After dozens of hours of work, we had finished the Isthmus, the western plain, and the central Corinthia and had left only the territory east of the canal.

When I commented on our progress last March, Richard Rothaus of Trefoil Cultural and Environmental posted a link to this 2006 article by Konstantinos G. Nikolakopoulos and Nektarios Chrysoulakis about the accuracy of the Greek 1to50:000 topographic maps. The authors compare topographic maps digitized from the Greek 1to50k maps (which were created in the 1980s from aerial photographs), to topographic maps generated from two sets of NASA space imagery and digital elevation models, ASTER and SRTM. They conclude that the topographic data from ASTER and SRTM is more accurate and can be used to correct the Hellenic 1to50k maps: “The accuracy of the ASTER DEM is considered as suitable for updating 1:50.000 topographic maps and the SRTM DEM is suitable for the detection of areas that need updating.”

Sounded valuable, but I had done all this work already using the Greek topo maps as the base, and I figured it would be easier for me to complete the process of tracing the old-fashioned way than take the time to learn how to create contour lines from DEMs. So, in late October, I decided I would finish the map the traditional way by tracing and clicking. I focused on the Perachora peninsula as an experiment to determine how long it would take to complete the entire Corinthia. The image below shows much I had accomplished after 2 hours: note the red lines marking the digital copy over the mass of gray contour lines. So I had probably digitized 10-15% of the peninsula. I reckoned that finishing the contours for all of the Corinthia would have taken 40-60 hours or more. 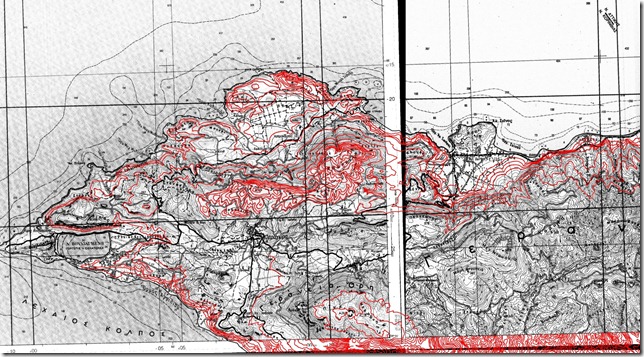 Clearly that was not a good use of my time, so I explored the alternate option, creating topographic maps from NASA DEMs. I began by downloading the DEM model from this SRTM website, and later, the ASTER files from Earth Explorer. Once I added these into ArcGIS, it was a pretty easy process to learn the steps in ArcGIS, as this youtube video shows (and many other online tutorials). I did encounter a few ‘rookie’ problems like not having the necessary ArcGIS extensions and getting the DEM rasters to relate to the rest of my data, but these were easily resolved by talking to friends. The entire learning exercise required only a long day, and the conversion itself takes about 45 seconds! In less than a minute, I have contours for all of the Corinthia.

The brilliant thing is that I can reduplicate the process to create contours at 1 meter, 5 meter, 100 meter, 500 meter intervals for all of the Corinthia, or for that matter, all of Greece. As I learned in subsequently corresponding with Angela Ziskowski and Dan Lamp, these contours can be exported to AutoCad in DWG format.

A major surprise was how closely the topographic data from the DEMs aligned with the 1to50k Greek maps. In the image below, compare the red lines with blue labels showing the contours created from the ASTER image with the underlying black lines with black labels showing the contours of the Greek 1to50s. They almost always fall within 10-20 m of the Greek army maps and frequently overlay exactly—and remember that it is the Greek army maps that are less accurate here. 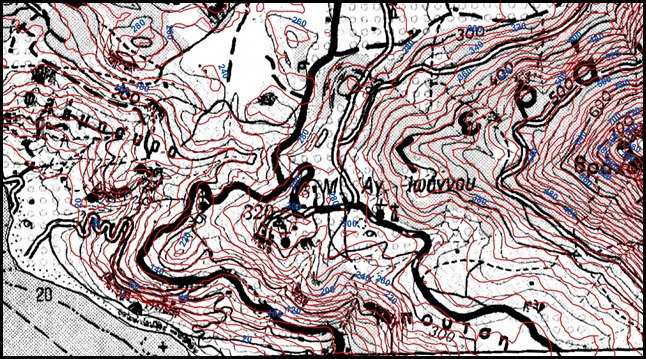 In the next week, I’ll post links to 20 meter contours for Greece for free download, and also updated maps of the Corinthia. Thanks to Brandon Olson, Bill Caraher, and Richard Rothaus for helping me figure all of this out.