It was unfortunate that I took all of my photos of the Eastern Korinthia Archaeological Survey using a camera loaded with print or slide film.  The survey was carried between 1998 and 2003, a time span corresponding with the rapid replacement of film cameras with digital cameras.  We used digital cameras every year of the EKAS survey, but since our main goal was to document quickly what we were finding—visibility, photos of features, etc…—we tended to use low resolution settings so as to store the most images.  The digital image collection is useful for study, but fair to poor for projection.  When I have really wanted to show images of EKAS to my classes, I have relied on my old collection of physical slides.

Until now.  Bill Caraher had some slides digitized for me last year as part of his creation of the outstanding collection of images of the site of Lakka Skoutara, a 19th and 20th century village of the Southern Corinthia.

And over the summer, Cindi Tomes of Messiah College’s Faculty Services kindly scanned hundreds of old slides relating to my archaeological work in the Corinthia and Kythera, and travels in Greece.  The images are at a sufficient resolution for PowerPoint presentations for presentations and lectures.  Thanks, Cindi!

Since there are few images of the Eastern Korinthia Survey online (Caraher’s omeka collection of Lakka Skoutara photos being the exception), I figured it would be worthwhile to create some galleries.  I have uploaded the first batch to this page of the photo gallery.  This gallery shows field walker and survey images around the Isthmus, and is compiled from the few photos I had previously scanned, along with the slides scanned recently.   I include a few photos below as examples.

Field walkers document the artifacts of a Roman-Byzantine villa below the Perdhikaria Ridge (2001). Slide scan by C. Tomes. 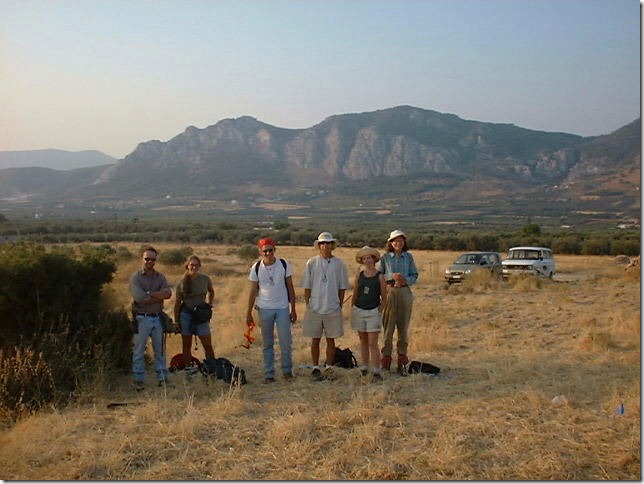